Baghera/wines, with the help of Dominique Fornage, celebrates the most legendary port of all – Quinta do Noval “Nacional” and offers you an exceptional evening around 11 vintages.

Dominique Fornage will host this exceptional evening around the 11 vintages of Quinta do Noval:

This Quinta, whose name appeared in 1715, is considered the most prestigious.

António José da Silva, trader from Porto, acquired Quinta do Noval in 1894, previously devastated by phylloxera. He revives the estate by replanting the vineyards.

In the 1958 vintage, Quinta do Noval is the first house to launch a “Late Bottled Vintage” port, that is to say a vintage port with late bottling, at least 2 years later than the classic Vintage.

Quinta do Noval was also the first to introduce to the Tawnie market with an indication of the number of years of breeding: 10, 20 and 40 years.

Quinta do Noval was transferred to AXA Millésimes in 1993. The famous Christian Seely has since been its managing director.

As in many other “Quinta”, the harvest which is poured into “lagares” (large, wide but low fermentation tanks) is crushed. Fermentation starts quickly and takes place in a fairly short time. At a chosen time, when there is a certain level of unfermented sugar, we proceed to the addition of a grape brandy grading 77 degrees. The final alcohol will be around 20%. The press and press juices are still assembled.

The vines are increasingly worked according to standards respecting the environment. All are classified "A", that is to say in the sectors considered to be the best.

The success of the Quinta do Noval rests mainly on a legendary vine of 2ha (6,000 feet), not grafted, signed only in great vintages under “Nacional”. The varietals of this plot are: Touriga Nacional, Touriga Franca, Tinta Roriz, Tinto Cão and Sousão.

The Quinta do Noval vineyard produces 30 to 35hl / hectare. The plot of Nacional gives only about 12 hl / hectare. Cultivation and harvesting are done entirely by hand.

The Nacional is vinified in the same way as the other Vintage, but its entire harvest is raised for two years in an old oak barrel with a capacity of 2,500 liters.

The few bottles produced (2,500) sells extremely expensive because of the quality deemed unmatched by amateurs.

The vine was planted in 1925 and spawned its first Nacional in the 1931 vintage. This 1931 Nacional is considered by the lucky few to have drunk it as the greatest Port of all time. Finding them right now is a miracle.

As this fabulous Porto benefits from a positive evolution that spans decades, some “younger” Nacional begin to pretend to equal the mythical 1931.

The exceptional vertical organized on 11 November 2017 of 11 of the best declared growths undoubtedly appears as a source of valuable information on this subject. 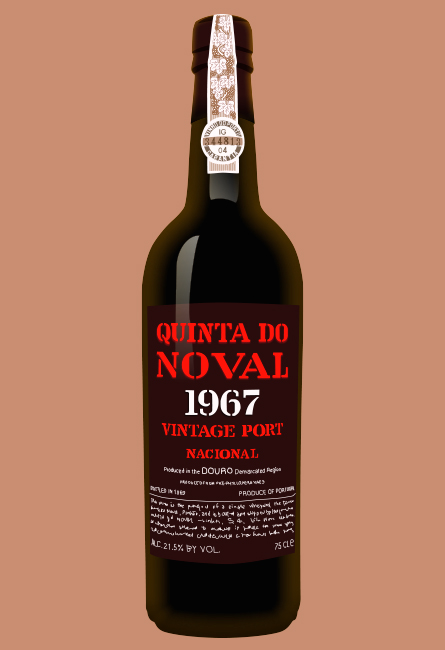